AWS Elastic Beanstalk Platform Provides a simplified approach to provision and scale EC2 Instances on the AWS Cloud. This is the AWS response for the Paas to deploy the codebase without worrying about the Infrastructure. Even the reverse Proxy, Load balancing and Auto Scaling can be configured automatically. If you want any customizations, you can customize them via extensions as per the standard procedures laid out by AWS and this is only for advance use cases and this will also end up with issues if this is not configured properly. In this post i have summarized all my learnings on the EB Environment which will be searchlight for people who struggle with this service.

AWS Beanstalk Provides options to choose platform based on the application language. This includes Python, Java, NodeJS , dotNet etc. Each of these Platform provides version which eventually needs to be upgraded as and when AWS deprecates a version. Example, At the time of writing this, NodeJS 8, 10 are deprecated and NodeJS 12 and 14 are currently supported in the AWS Platform.

All the EC2 Instances by default are using the AWS Linux a modified Linux Distro for all AWS EC2 Instances/Service. Even the Lambda uses the same Linux distro for executing the functions. Recently AWS Upgraded the Generation to AWS Linux 2 and all the Preceding are Deprecated. Customizations for the beanstalk environment is not exactly same for these 2 generations. It slightly varies on how the scripts are executed while deployment.

Before working on the Beanstalk Customization, One should understand how AWS handles the deployment. When a new deployment is Initiated, the source code is pushed to a deployment folder in S3 bucket and it uses that as a base whenever a new instances are launched. Then the code is extracted to a temporary folder called staging.

From here the npm start script is called by default and the application starts. Here a sample package.json.

If you want to customize the default start command, you need to overide using the .ebextensions. See below for details.

Through custom scripts placed inside a (.ebextensions) in the root of your package, one have a full control over the app deployment process starting from building the app to the deployment stages. It also supports to change the default reverse proxy server from NGINX to any custom server like apache (httpd).

AWS Linux 2 stopped supporting few scripts via .ebextensions and they introduced one more folder called .platforms. This way any platform related changes can be dropped in this folder path and that will be copied over to the target environment.

Here the diagram which is given in aws doc on how these scripts will be overrided and executed. 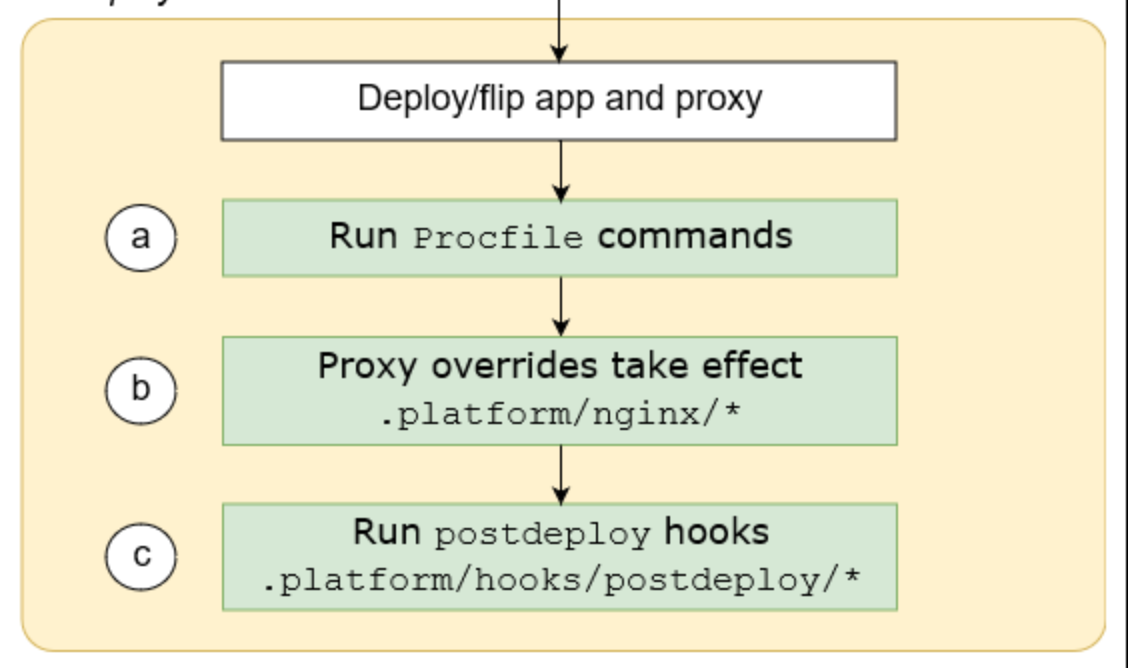 Most of time we may just create a build locally or using a CI and create a bundle of the artefacts and it can be uploaded to beanstalk as a compressed file. But in some scenarios, we may need to run some scripts or build the code on the fly. This type of customizations can be done using the hooks extensions provided by AWS. Hooks are special scripts which can be invoked by the AWS EB platform at various stages like predeployment hook, post deployment hook etc. This is more useful in case if you want to change the default behaviour of the paltform. Eg, EB uses npm install for the nodejs to install the code dependencies. If you wnat to override this with yarn, then create a separate hook script and add the commands to install and yarn and run yarn install in the code folder.

Exposing a application through a reverse proxy has become the defacto standard. AWS EB uses NGINX as the default reverse proxy. Once can opt for Apache as well and can be customized using the proxy preferences. Infact we can even replace the entire configuration and add custom locations and further customize the upload size limit and other http related settings. In the previous generation we can simply use a script to create those files via .ebextensions. For the new Linux 2, AWS expects to create a separate folder .platform and keep those configuration files there.

​ You may not always need a LoadBalancer for your application due to the target user count. Earlier Its possible to make the minimum count to even 0. But in the recent times, its hard to apply these settings. By default EB attaches a Load Balancer when you try to create a new environment from cli. I recommend to go with the Load balancer for a mission critical apps which needs to be up and server based on demands. Apart from the Auto Scaling, the Load Balancer Settings provides a interface to configure the HTTP Endpoints (80,443). Also, you can easily attach a AWS Certificate (free from AWS, but you cannot use them externally) to this 443 Listener and the site can be powered with valid SSL in few minutes once the domain name is verified.

Steps to Change from LB to Single Instance

Changing to Single Instance takes some time as EB assigns a PUBLIC EIP and detaches the Instance and remove the original LB. It will take 5 to 10 minutes. Then you can access the Instance using the assigned EB Url or you can open using the eb open command.

OK. Now after changing to Single Instance, how to enable the SSL ?. Amazon doesn’t provide option to configure the ACM Certificates for the Single Instance. We may need to add some additional scripts via .ebextensions to attact custom SSL certs which you received from the CA. ALternatively we can use the LetsEncrypt to Issue a certificate and renew them automatically using a CRON. Please see below.

Mostly SSL Customization are needed only if you are going with the Single Instance on the EB. Otherwise ACM should able to help us to attach the Certs directly via Listener settings.

Here the steps and snippet to configure the SSL using LetsEncrypt

Please set the environment variable DOMAIN_NAME and EMAIl_ID, that will be used in the script. The script will be executed by beanstalk everytime at the time of predeployment.

If you want to get/set env variables for your platform from your local cli without login then this will help.

Alternatively, you can use the process.env to display the env variables from your app for trouble shootig purposes.

If you want to troubleshoot a issue by logging into EB SSH you will be surprised that it will not allow you to access the shell prompt for the application it was started. As mentioned above, it uses nodejs account to start the app. When you switch user su nodejs, you will not get a prompt because it was disabled by default. You can enable them using the following.

Note : This is applicable only if you are using OLD Linux Generation. The New AWS Linux 2 runs on web app account and shell prompt is enabled by default.